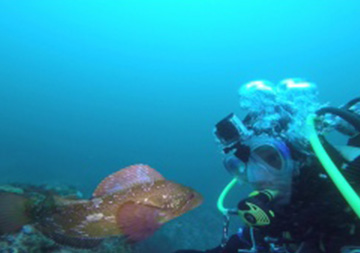 Giulia Grimaldi, winner of the SES Neville Shulman Film Award 2015 for her expedition to the Commander Islands off the far eastern coast of Russia, has achieved some inspiring developments directly resulting from her first visit to the country.

She was approached by Olesya Ilina, a Russian expedition leader who had heard about her research into microplastics, and invited to join him on an expedition to analyse the health of Lake Baikal - supposedly the cleanest lake in the world. Giulia’s role as lead diver was to collect samples and analyze the microplastics.

Limited time in country and restrictions on sending samples out of the country for analysis lead to Giulia returning to her current home in Oslo and teaching Dr Ilina and her team to test the samples by skype!

A year later, Dr Ilina has established her own lab at the University of Moscow to monitor microplastics pollution! Meanwhile in Norway, Giulia has set up a collaboration within the diving community across the country to monitor sea sediments for microplastics, and set out a programme to create a base line for environmental quality by 2018.

Looking back, she is thrilled at what she has managed to achieve over the last two years, and firmly believes that none of this would have been possible without the support of Neville Shulman and the SES! CLICK HERE to see the film from the 2015 Expedition.