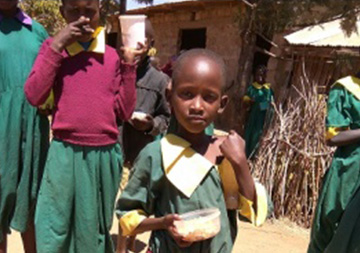 A final phase of the expedition has been based at the El Karama Lodge in Kenya's high country, Laikipia.

Generously hosted by Sophie and Murray Grant, our team enjoyed their hospitality, whilst taking part in a national census of Grevy's Zebra, an endangered species, now found mainly in Kenya.

Moving over the sprawling flat land in El Karama's robust safari cars, we photographed and studied this fine-looking beast. Larger and stronger than other zebra, only 2,500 are left. This is largely due to land degradation as well as some poaching and disease.

The land around El Karama teems with game and we had sightings of giraffe, elephant (25 in one herd), buffalo (up to 60), hyena, many antelope, hippo and three majestic lions. Meeting a sleek, proud leopard was a highlight of the game survey.

At the Deraja Academy for girls, we provided school books and Dr João Branco gave lessons on dental hygiene. Janet Wood issued extended shoes that fit all sizes to poor pupils. Reading glasses were distributed and various members of our team gave lectures on a wide-variety of subjects.

Roberto Lora and Tom Rich used our camera traps to collect images of buffalo, and elephant that visited the lodge at night.

Our Deputy Leader, Sqn Ldr Jack Holt RAF, organised our traditional Burns Supper with Stahlys haggis. We toasted the poet with a dram or two beneath a star studded African night.

Recordings of God Save The Queen and the Kenyan National Anthem were played on a laptop, after which members gave entertaining performances including powerful renderings of classic Opera by Charlotte Austwick - an unforgettable final bush supper, served beneath a full moon by El Karama staff.

Before leaving this memorable oasis, most of the team visited Murray's studio to see the outstanding sculptures of Wildlife for which he is famous.

We are deeply grateful to Sophie, Murray and all staff at El Karama for allowing us to spend a few days at this world class eco-lodge. An experience that will not be forgotten. Thus the expedition was completed with its mission accomplished! Ends