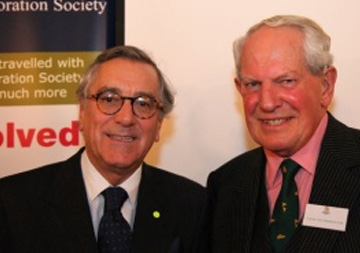 On Tuesday 13th February, Colonel John Blashford-Snell OBE and a committee of SES supporters held an event to commemorate the 26 expeditions that the Society has supported in Latin America, since the epic British Trans-American Expeditions of 1971-72, which made the first vehicle crossing of the complete Darien Gap between Panama and Colombia.

Held at Canning House, the UK’s leading forum for informed comment, contacts and debate on Latin American politics, economy and business, there was a champagne and canape reception followed by an exciting illustrated presentation by JBS and Yolima Cipagauta, the SES representative in Latin America. This was followed by an auction and a raffle to raise funds for the Society and to aid the Ticuna Indians in Colombian Amazonas.

His Excellency Nestor Osorio, the Colombian Ambassador was the Guest of Honour.

All tickets were sold and approximately 100 guests and helpers attended the evening. Leading SES supporters Sir Peter and Lady Lampl and Alan Rivers were amongst the guests.

The presentation was put together by Alan Campbell and projected by the Society’s Honorary Logistics Officer Dave Smith.

Many guests declared that it was a most enjoyable evening.

Photo by Julia Thorold of John Blashford-Snell and His Excellency Nestor Osorio, the Colombian Ambassador