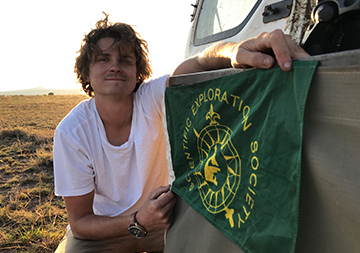 SES Elodie Sandford Explorer 2017 Alex Braczkowski continues his work in Uganda, and posting incredible images on his social media. He has sent the following clip of his work for the SES

Alex and his team have so far identified 32 individual lions as part of a new lion survey across the Kasenyi and Ishasha sections of the national park. Alex will be analysing this data to come up with an estimate for the entire 2,000 km2 park! Funds that you all so generously contributed to the Award in Elodie’s name have funded the majority of the 80 camera traps he will be setting across the park as the second phase of his PhD research.

"We're trying to update large carnivore numbers across a really big area and the SES funding for my PhD research has meant that I not only get really great shots of lions and leopards living in a unique environment (Candelabra and fig tree forests) but has also meant we can set 80 camera traps across the park to get the first numbers of leopards and update lion and hyena numbers taken 10 years ago! Uganda is a case study of a rapidly expanding human population in Africa (it will experience a 5x increase in the next 35 years) - we need to figure out how big cats and other carnivores can live alongside people!" said Alex in Kampala. 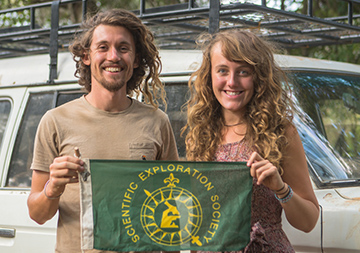 SES Rivers Foundation Explorer 2017 Jamie Unwin and expedition partner Hannah Pollock have now completed their project in Kenya and have just arrived back in the UK. The response they received from the people out in Kenya has been truly amazing and the positive feedback they received has been more than they could have hoped for.

Talking about the expedition, Jamie said "We're really excited to share with you our experiences. Whilst in Kenya, we made the first ever extensive series of local language films (Maa & Swahali) following the remarkable stories of Kenyans fighting to protect their wildlife. We produced 10 short films on a range of topics from a Maasai man who habituated himself into a troop of Baboons to a boy who raised a buffalo. Using local people to front these films proved extremely successful and the stories which were told were relatable and inspiring to the masses. During the second part of our project, we took these films back to rural communities using our bicycle powered cinema and we managed to reach 10,000 people.

"We were told by communities that they had never before seen their fellow Maasai in a film talking so passionately about wildlife and talking in Maa. Our hope was that by showing relatable people in the films, the films would be a really effective way of inspiring more people and this was very much supported by audience feedback".