East of Ulaanbaatar, the Hentii mountain range rises out of a vast protected area covering 1.2 million hectares covering the transition zone between the taiga and mountain forest-steppe. The cedar and larch forests only grow on the Northern slopes, whilst on the Southern side of the mountains there are grasslands. The highest peaks stand above the tree line and are rocky, wide and flat, often snow-clad. Lower down the terrain has lakes, wetlands, icefields and sometimes hot springs. Three great rivers flow through the region. Much of this remote wilderness is uninhabited and accessible only on foot or on horse. Over 1,000 plant species and 50 mammals, including endangered moose, musk deer, brown bear, wolf, lynx, badger, fox, wolverine, marmot, weasel, sable, roe deer and maral can be found here. Bird lovers will be able to see up to 250 types of birds, including hooper swans, spoonbills, egrets and raptors. 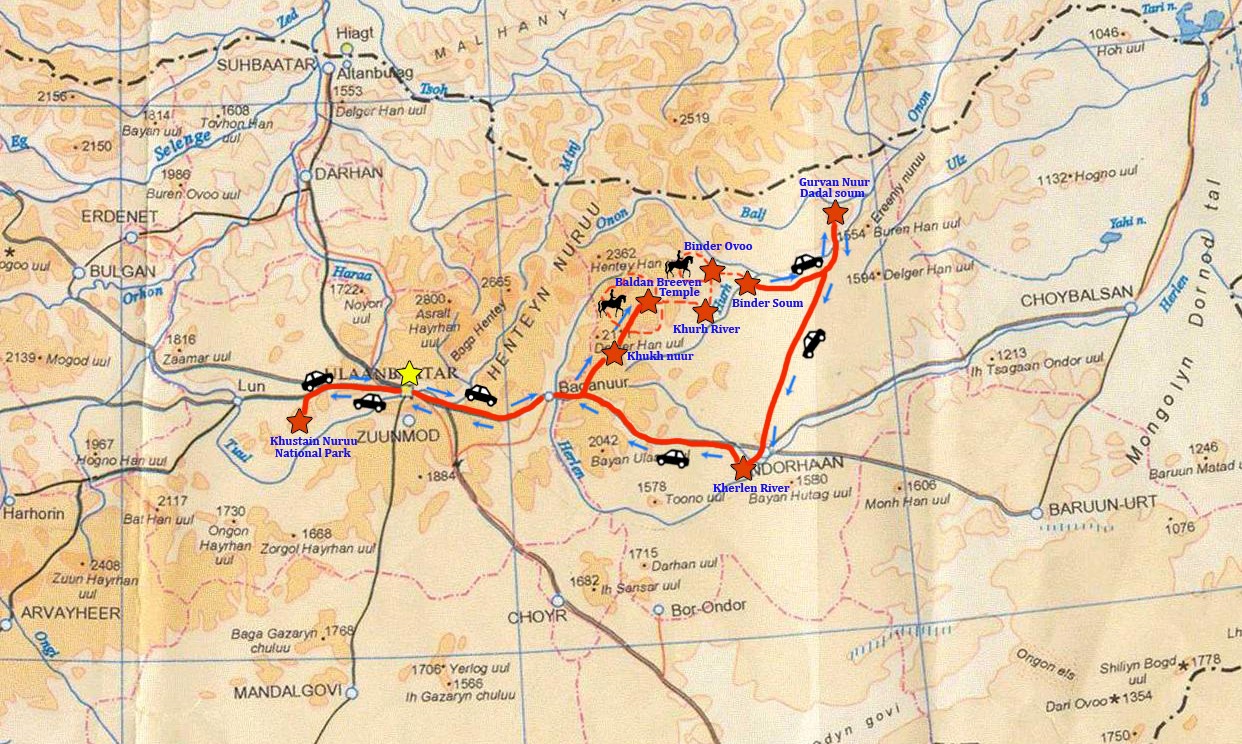 However, the Hentii has an ancient history of human population as this is an ideal country for herding and hunting, with plenty of grass in the summer and shelter for animals in the winter. The forests provided the nomads with wild meat, fruit, furs and timber. Minerals including gold, tungsten, asbestos, uranium, iron, copper, manganese and tin as well as coal and fluoride are other natural resources here. The rich heritage of human settlement in Hentii is marked by numerous rock carvings of the Upper Palaeolithic and Stone Age period, deer stones (or stelae), and Bronze age tombs. There is also the mysterious Great Wall of Chinggis Khaan, or Ghenghis Khan as he is often referred to currently. Indeed, it is firmly believed by the Mongolian people that the legendary leader and warrior was born in the Hentii and is buried in the area.

Burkhan Khaldun mountain (7,750 feet) is alleged to be where the conqueror lies. However, although many attempts have been made to locate his grave it has yet to be found and generally Mongolians do not favour it being disturbed. Numerous historical sites are linked to Ghengis Kahn and the Buddist culture has its famous Baldan Bereeven Monastery, destroyed by the communists in 1937 but reconstructed in the 1990s. June and July are the height of summer which usually have warm, dry weather, although sudden storms can always occur throughout Mongolia and at the higher altitudes it will be cold at night. Daytime temperatures up to 25 degrees centigrade are usual.

The expedition will be carrying out community aid projects, giving dental and medical help to the local people and performing archaeological, biological and zoological tasks with Mongolian scientists. The scientific studies are organised with the support of the National University by Professor Terbish, who has accompanied our expeditions since 1992.

Travel will be by horse and four-wheel drive vehicles. Accommodation will be in tents provided by our agents. At the end of the expedition there will be 2 days in the Khustain Nuruu National Park (West of Ulaanbaatar) studying the Przewalski horses and carrying out zoological research.

In view of the conflict in Ukraine, John has decided to postpone the expedition to 2023 (June-July) and actual dates will be provided nearer the time. John Blashford-Snell is leading the expedition, which needs a doctor or a paramedic who can ride a horse (but not especially expert). There are two other vacancies for general hands. Please contact John for more details (01747 854 456 and This email address is being protected from spambots. You need JavaScript enabled to view it.).

SES members and all other participants in SES Endorsed Expeditions take part at their own risk, and will not hold SES, its trustees, employees, volunteers, partners or agents liable (whether in contract or in tort or in negligence or for breach of statutory duty or otherwise) for any loss, damage, personal injury, delay or expense suffered or incurred on any such expedition. SES endorses the aims and objectives of these expeditions only.